The Hermitage Museum is an early 20th century Arts-and-Crafts estate in Norfolk, Virginia. It features an art collection spanning 5,000 years, contemporary exhibition galleries, a Visual Arts Studio, and 12 acres of gardens and grounds.

In 2003 the museum suffered a serious fire that almost destroyed the Gothic revival music room.We were commissioned to reproduce all the damaged woodcarving, including the elaborately carved oak Gothic screen, which featured tracery, capitals, columns, sculptural foliage, figures, and pierced cresting.

The original work was carved in the early 20th century and was inspired by the 14th-century screens typically found in village churches of England’s West Country.

We studied the charred original woodcarvings carefully and reproduced them exactly. We had undertaken a similar project a decade earlier for the Utah Governor’s Mansion, which had also suffered a fire.

The artisan of the original piece incorrectly carved the two mouldings into a solid piece rather than as separate pierced sections that would have been applied, as was commonly done in the 14th century. Had he known this, it would have made his life—and ours—a lot easier, as we were naturally required to follow his work.

The whole project took our carvers around 2,500 hours to complete.

Waterfront Lumber of Norfolk completed the construction and installation, and Carey Howlett, a highly accomplished conservator, managed the project.

“Agrell Architectural Carving contributed greatly to the success of one of my most challenging projects. Throughout the project, I was truly impressed by the outstanding quality of the firm’s work and by Ian Agrell’s enthusiasm, personable manner, and professional commitment to the project.” — F. Carey Howlett, Project Manager and Conservator 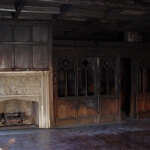 Fire damage at the Hermitage Museum 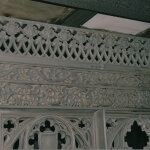 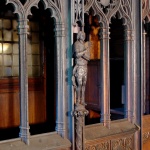 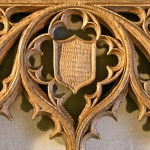 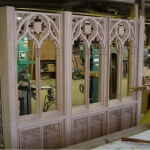 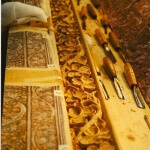 Detail of the bressumer (the carved beam below the crown) 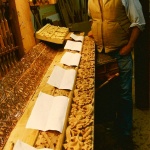 A woodcarver works on the beam details 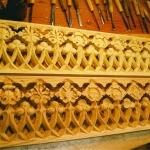 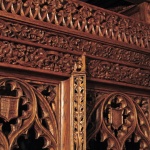 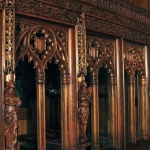 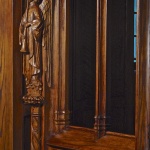 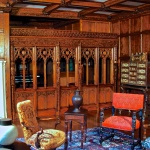