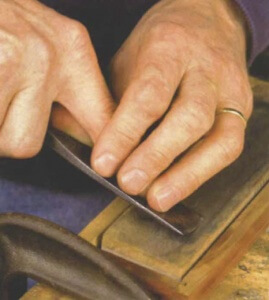 To sharpen a gouge, hold it 10 degrees to the stone and slide it back and forth while simultaneously rolling it so that you remove the same amount of material along the entire bevel. Image courtesy of Fine Woodworking magazine.

Learning to sharpen carving tools takes time, patience and practice, much like carving. I tell my students to treat sharpening as an art in itself. Of course, the real joy comes when they use a wonderfully sharp tool, which doesn’t just cut wood but leaves the surface beautifully burnished – shiny, smooth, without any nicks or scratches.

There are a great variety of sharpening materials available—all manner of electric grinders, natural and man-made stones and honing compounds. I hold no brief for any particular machine or stones. More important than the choice of sharpening system is knowing what shape is required for carving tool’s edge. Outside and internal bevels and the angle of the cutting edge relative to the tool’s shank all have a vital bearing on how well the tool will behave in wood. I recommend that most tools be honed with inside and outside bevels of about 10 degrees.

Now this isn’t rocket science, so a degree or two off won’t blast your carving skills out of orbit. But aim for consistency. Later on you may wish to experiment with different angles to see what suits your style of work, and you may indeed find that changing some angles will be advantageous.

All tools require an edge that’s square to the shaft

Sharpening by hand is of course the traditional method for getting a good edge. If you’re a beginner, this method can be instructive because you can see the tool’s edge taking shape, albeit slowly. It’s easy to make corrections without removing too much metal or overheating the tool, which can destroy its temper. 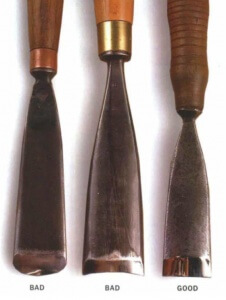 The edges of most carving tools should be square. Gouges with convex (left) and concave (center) edges will give you fits when carving. A square edge (right) provides the best control. Image courtesy of Fine Woodworking magazine.

There are two basic steps to sharpening carving tools. First, you have to shape the edge of the tool relative to the shaft. Second, you must hone and strop the bevel(s).

Most carving tools work best with a cutting edge that is square to the shaft. If the corners or wings are rounded, you cannot get the entire cutting edge to arrive at the same depth when setting in(cutting down into the ground of a carving). Or, if you try to slide the edge of a rounded gouge into a small corner to remove wood, the nose or tip of the tool will get in the way. You will also have problems if the nose of the blade is ground more than the wings. Skew chisels, whose blades are purposely angled, are the only exception.

A blade is easily squared by holding the tool vertically and dragging it back and forth over a coarse stone. Don’t worry about the bevel now; just square the cutting edge relative to the shank.

The next step involves honing the bevel edge(s). Some tools have bevels on both sides of the edge; other tools have only an outer bevel. Much of the honing can be done on the same benchstones you use to sharpen other tools, such as bench chisels and plane irons. For honing the inner edges, you will need smaller stones, called slip stones, and these come in a variety of shapes to fit different tools. Go through successive grits, as you would when sharpening your other bench tools.

After an edge has been honed, a sliver of metal, called a wire edge, remains on the opposite side just sharpened. To remove it, and finely sharpen the edge even more, I strop the edge using a piece of leather (2-oz. shoe sole leather, which is available from a cobbler) to which has been added a small amount of metal polishing compound, such as jeweler’s rouge.

Chisels are the easiest of tools to sharpen

Although a straight #1 is not used much in the European style of carving, it is useful for lettering. The #1 is therefore sharpened on both sides, which also helps it reach into nooks and crannies.

Grip the chisel in your right hand, and place your index finger atop the blade (see the top photo on p. 66). Place the fingers of your left hand over the right index finger, and move the tool back and forth, sideways across the stone, holding it at 10 degrees. Work from coarse to fine. Both sides of a chisel can be sharpened in this manner. For skew chisels, hold the chisel at the skew angle to the stone, and swipe it back and forth. Finish by stropping with leather charged with metal polish.

To carve smooth, long sweeps, gouges require shallow bevels that allow the tool to be held at about 25 degrees to the work. I recommend a continuous 10 degree outside bevel for most gouges. 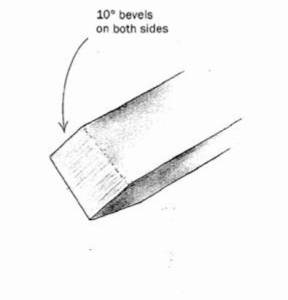 Sharpening chisels is fairly simple. Hold the chisel 10 degrees to the stone, and slide it back and forth. Do both sides this way.

It’s best to practice your sharpening on a shallow gouge first, such as a #3. (For more on selecting carving tools, click here). To hone the outside bevel, grip the gouge with your right hand, and lay your index finger inside the flute. Allow the handle to run up the under side of your right wrist so that your whole forearm and chisel address the stone at a consistent angle. Place your left hand over your right to apply extra pressure.

Slide the gouge from side to side while simultaneously rotating it so that you reach the end of each sweep at the corner of the blade. Continually check the blade to make sure that the metal is being removed evenly, paying attention to those areas that need more work. With high-section, deep-fluted tools like a #11 gouge, you will have to split the task into three actions, the two sides and the middle section. The bevel from the heel to the cutting edge should be straight and neither convex nor concave.

I also remove the ridge at the heel, where the bevel meets the shank, by swiping it across the benchstone in a rolling motion. Rounding this region will make your carving flow better, particularly when using spoon gouges. For delicate carving, it’s also a good idea to remove a small amount of metal on the side of the gouge, which will prevent the tool from becoming a wedge in deep, stabbing cuts. Finish by stropping the bevels with leather and metal polish. 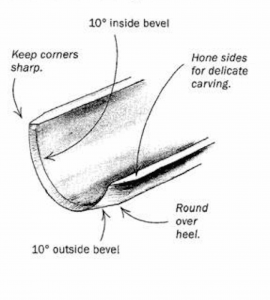 Sharpening gouges requires two coordinated motions. Grip a gouge as shown, hold it 10 degrees to the stone and slide it back and forth while simultaneously rolling it so that you remove the same amount of material along the entire bevel.

To check for sharpness, I hold a tool so the blade is facing me. A sharp edge will look like a thin smile and not reflect light. If it looks good, I make a test cut on a piece of soft pine, cutting at an angle across the grain. If the tool leaves scratch marks, it means the edge has a dull spot or a nick, and I sharpen that area some more.

The easiest way to hone the inner bevel, which should also be 10 degrees, is to move a slip stone from side to side. Alternately, you can clamp your stone to the bench and move the gouge across it. Again, if the bevel is too steep, you will not be able to work at a low enough angle to get smooth, flowing cuts. This method will create a good everyday gouge. 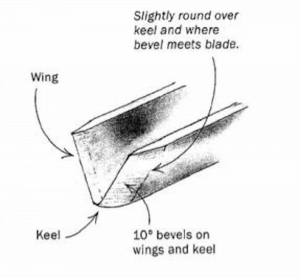 Sharpening v-tools. After grinding the bevels on both wings, grind back the keel at the same angle.

V-parting tools require the most patience

V-shaped tools such as parting tools and veining tools cause carvers the most misery because they are unforgiving when sharpened poorly. They need to be sharpened keenly and evenly. First be sure the edge is square to the shank. Then sharpen each bevel separately, being careful to remove the same amount of material on both wings. Hold the tool as you would a chisel, tilted up 10 degrees and perpendicular to the stone, and move it from side to side.

Be careful not to round the outer degrees or hook the base. Once the wing bevels are ground, you will have what could be described as a keel at the bottom where the two sides meet. Hone back the keel about 10 degrees. Finally, round the edge of the keel to give it a U-shape. To prevent both sides of the tool’s heel (where the outside bevels meet the shank) from catching, slightly round these areas, too.

You do need a V-shaped slip stone, of the same angle or less, to remove the burr on the inside face, but don’t hone a bevel on the inside. Finish off by stropping. Expect the V-tool to require more stropping than other carving tools before it creates a clean cut.

Your tools will retain their edge with an occasional stropping. Every now and then they will have to be re-honed. They should be picked up separately and put down in such a way to prevent them from knocking together and chipping an edge. When you carve, place the tools you are using in a line with the cutting edge facing you. In this way, you will immediately be able to select the tool you require, then pick it up and carve.