In the winter of 1993, a Christmas tree fire in the Grand Hall of the Utah Governor’s Mansion destroyed almost all of the building’s interior, including ornamental woodwork and woodcarvings of the absolute highest quality.

It was decided that mansion, which was built in 1902 by silver magnate Thomas Kearns and listed on the U.S. National Register of Historic Places, would be returned to its original condition at a cost of $7.8 million (approximately $15 million today). Agrell Architectural Carving was commissioned to exactly replicate the charred white oak decoration.

The original carvings had been commissioned at the end of the 19th century by Kearn’s wife during a trip to Germany and Austria. We know the carvings were undertaken by German-speaking craftspeople because we found remnants of newspaper stuck on the underside of some of the appliqués. Today, we still use newspaper to temporarily attach delicate carvings to a work surface.

Our task was to exactly replicate the carvings, which included a large volume of intricately carved balustrades, newel posts, figures, capitals, columns, and egg-and-dart molding, as well as some significant stone work on the exterior. Luckily, much of it had held together well enough for us to copy or extrapolate the designs accurately.

It took us around 20,000 hours to complete the project and kept us busy for a couple of years. At the time, it was considered the largest woodcarving commission undertaken in the world in the previous 10 years.

Agrell Architectural Carving GM David Agrell wrote about the experience in an article for Popular Mechanics magazine: “Dad handed me a blackened length of molding with eggs as smooth as the real thing and darts that were sharp and angular. Deep crevices accentuated the shapes, which repeated flawlessly along the length of the piece. My job was to reproduce it exactly, by hand, in a few hundred feet of oak.”

Of course, we carved everything by hand, just as it was done originally. Our experience is that modern machines can’t handle designs devised a century ago.

Ultimately, the carving we produced is indistinguishable from the original craftsmanship. It remains one of our proudest achievements as a company—especially given the work is in the public arena for all to appreciate. Our client was certainly pleased.

“Agrell Architectural Carving’s attention to detail was astounding, from the carved capitals to the complex figure carving on the oak Botticelli column bases. Their contribution and devotion to the project was without equal.” —Robert Pett, MJSA Architects, Salt Lake City 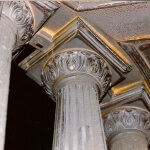 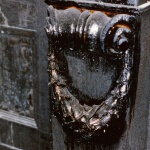 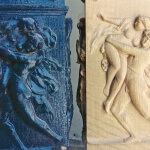 Carved pilaster bases depicting The Rape of the Sabine Women 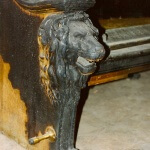 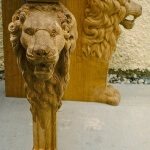 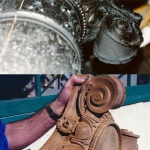 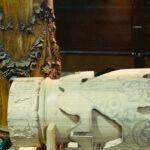 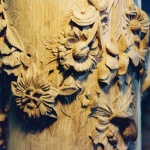 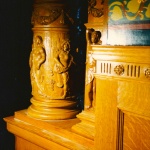 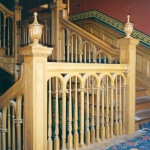 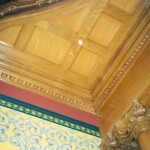 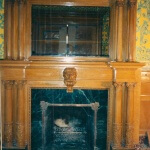 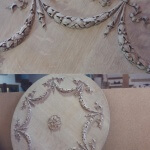