Louis XIV came to the throne in 1643 and died in 1715. His reign had enormous influence on ornamentation and has greatly affected woodcarving to the present day.

When clients ask for a “French paneled room,” they generally mean the period and style of decoration found in The Palace of Versailles just outside Paris. The ornamentation of this incomparable palace of over 720,000 square feet developed before and after the Louis XIV period. It has a unique quality of design and workmanship, and we have spent countless hours studying and recreating this fine work for our clients.

The style Louis XIV (sometimes referred to as “Louis Quatorze”) really developed around 20 years after he ascended to the throne. At that time many of the French aristocracy and powerful politicians were commissioning fine houses and buildings. At around 1670 the king started to demand that the architects employ the grand style he preferred. The results influenced the design and construction of not only Versailles but also such buildings as the Gallery of Apollo at the Louvre and the Château de Marly.

The Hall of Mirrors at Versailles, with its glittering gold detail, is particularly superb and has inspired many ballrooms and reception areas. However, many of the palace’s smaller living spaces contain the most delicate and exquisitely carved oak panels of oak. Most are painted a simple white color or feature naturally colored acanthus and flowers, which was fashionable during that period.

Agrell Architectural Carving has enjoyed having the opportunity to recreate this wonderful work in private residences in England, such as Dudley House on Park Lane in London, as well for homes on Park Avenue in New York.

Check out designs for our historically accurate French-style room. 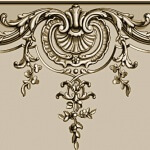 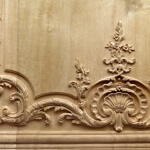 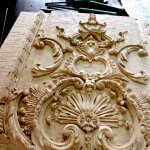 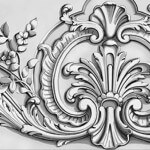