Generally the term Romanesque refers to the period after Roman architecture, from about 800 until Gothic, around 1150, and describes the assimilation of Roman arches into the barrel-vault style of architecture. It was developed by the Normans in Germany and expanded into France, Italy and Spain during the 11th century. Each country created a style to fit the culture, people and materials that were there. In Germany you’ll see tall spires, while in Italy you’re more likely to see brightly colored features that use local marble. In Normandy and France, the Romanesque cathedrals were beautiful but severe.

After conquering Italy and consolidating his empire, King Charlemagne moved to the city of Aix-la-Chapelle, in what is now Germany, where Romanesque art and sculpture began to be developed. In 800, King Charlemagne, now a Holy Roman Emperor, was in competition with the Byzantine Emperor in Constantinople, who, among other things, was influenced by the Islamic distaste for idolatry. The rift between Constantinople and Italy grew, and seeing an opportunity for work, Byzantine craftsmen and artists moved to Italy. Using these immigrants and local artists who were from the old Roman Empire, Charlemagne had the skills he needed to decorate his palaces, cathedrals and churches. Romanesque was therefore influenced by both Classic and Byzantium art.

Typical of the Romanesque period are massive cathedrals and monasteries that were constructed to accommodate the hundreds of thousand of pilgrims who came to see the holy relics brought back from the Holy Land by the Crusaders. At the same time, the Romanesque style known as Norman was being developed in the British Isles—including London’s Westminster Abbey.

The Norman kings and aristocracy also needed castles to reinforce their power. They also needed them to help survive constant war. These castles were not built for their looks; they required a solid design with heavy stone towers. Luckily for the craftsmen of the time, decoration was still used on the pillars and arches inside the castles.

The next century must have been a good time for woodcarvers because about 7000 churches were built, creating a huge demand for decorative religious art. We can imagine teams of artisans, with their guilds and traditions, traveling around Europe and the British Isles all speaking different languages.

The dramatic Romanesque period of decoration eventually gave way to the more delicate Gothic style in France, Spain and England—and finally, in the 13th century, in Germany, where it all began. 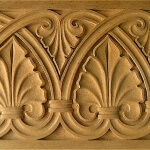 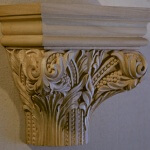 Carved wood capital in the Romanesque style, based on a design found at Aschaffenburg, Germany 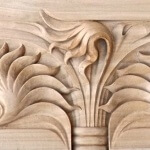 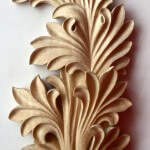